Named in honour of the mineralogist Lev Perovski, perovskite is the mineral form of the inorganic compound calcium titanate (CaTiO3). A large fraction of earth’s minerals has various compositions of metal oxides with the same perovskite structure. Such oxide perovskites are commonly used in our household applications including gas igniter (piezoelectric crystal) and capacitor. “The applications for perovskites have been so wide that it is very likely that you would have touched or used materials with perovskite structure at some point,” says Dr Angshuman Nag, faculty member at IISER Pune who specializes in developing semiconductor nanocrystals for optoelectronics. Lead halide perovskites and their colloidal nanocrystals have been of special interest to Dr Angshuman Nag and his team. Intense research across the globe over the last decade has established such halide perovskites as a new class of semiconductors, with potential applications in solar cells, light emitting diodes (LEDs), displays, photodetectors and flexible electronics. “The major advantage of the perovskite semiconductors is that they can be prepared very easily in a cost-effective way, unlike the tedious methodology required to prepare other semiconductor crystals like silicon and gallium arsenide,” says Dr Nag. [caption id="attachment_1805" align="alignleft" width="5000"]

Crystal structure of caesium lead halide (CsPbX3, X = I, Br, Cl)  perovskite having size around 10 nm emitting intense and bright colors in the visible region as X (halide) composition changes. (Image Credit: Dr Angshuman Nag)[/caption]   The colloidal nanocrystals of lead halide perovskites show intense light emission with high color purity (narrow spectral width). Due to this, industries are exploring the potential of such nanocrystals for their use in high definition displays in televisions and smart phones, along with LEDs. However, degradation of lead halide perovskite nanocrystals by water and light has been a persistent problem that hinders their commercial applications. In various attempts to overcome this problem, researchers have coated these nanocrystals with amorphous organic and inorganic shells. But such amorphous shells electronically isolate the nanocrystal from the rest of the optoelectronic device. Also, in many cases the nanocrystals are not as bright, light emission intensity being reduced by such shell formation. In a recently published paper, Dr Nag’s group describes a way to improve the stability of perovskite nanocrystals, while maintaining high light emission intensity and electronic connectivity of the nanocrystals. Here, the team coats caesium lead bromide (CsPbBr3) nanocrystals with crystalline zinc sulphide (ZnS) semiconductor shell, breaking away from the practice of using amorphous shells. [caption id="attachment_1807" align="alignleft" width="398"] 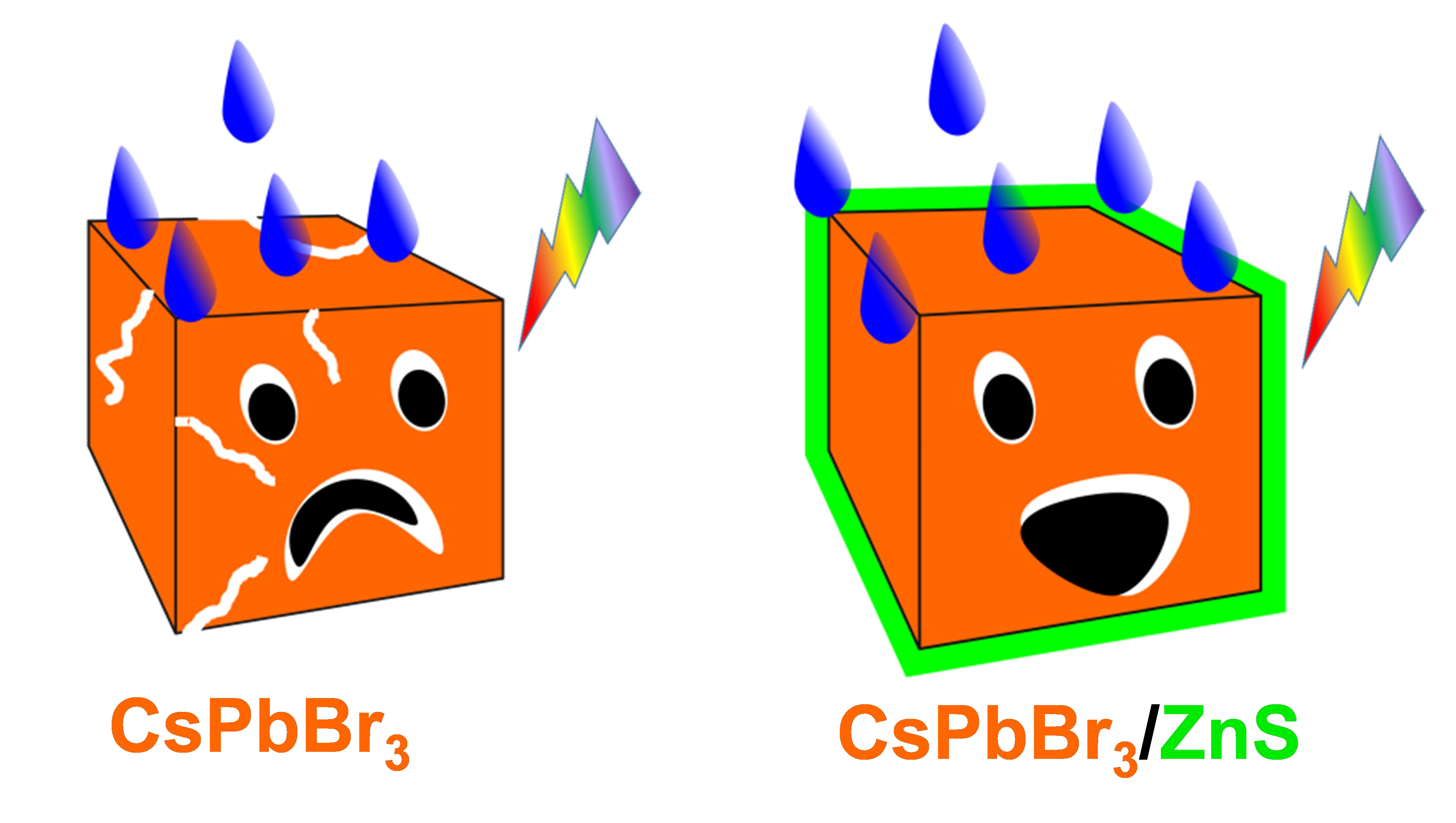 Bare CsPbBr3 perovskite nanocrystals gets degraded by water and light while having a shell of ZnS around make it stable towards these external factors. (Image Credit: Dr Angshuman Nag)[/caption] The team shows in the paper that the CsPbBr3/ZnS core/shell nanocrystals retain their strong luminescence even when dipped inside a beaker of water for more than 4 days. In contrast, the core-only CsPbBr3 nanocrystals (no ZnS shell) degrade and lose most of their luminescence within 1 hour of water treatment. The CsPbBr3/ZnS core/shell nanocrystals can also transfer charge to spiro-OMeTAD, a well-known hole-transport layer used in perovskite optoelectronic devices. The team believes that the advancement in making CsPbBr3 nanocrystals stable towards water and light will lead to the improved stability of the future optoelectronic devices. Having them stable in water will allow studying CsPbBr3/ZnS core/shell nanocrystals for their photocatalytic activities in aqueous medium. Dr Nag points out that forming ZnS shell on CsPbBr3 perovskite nanocrystals is extremely difficult. “Both the structural differences between the core and shell material, and relative instability of CsPbBr3 nanocrystal during the shell growth process, make it difficult to achieve a homogeneous ZnS shell growth around CsPbBr3 nanocrystals. A better control for homogenous shell growth is the next step for team,” he says, sharing further plans on this work. This research received funding from IISER Pune; Science & Engineering Research Board (SERB); and DST Nano Mission (Thematic Unit) India. Article Citation: CsPbBr3/ZnS Core/Shell Type Nanocrystals for Enhancing Luminescence Lifetime and Water Stability Vikash Kumar Ravi, Sajid Saikia, Shivam Yadav, Vaibhav V. Nawale, and Angshuman Nag (2020). ACS Energy Letters 5: 1794-796.   - With inputs from Dr Angshuman Nag, Edited by Dr Shanti Kalipatnapu